For many Berkeley residents, the high cost of housing and frequent news of California wildfires are two of the most defining characteristics of living in the area. Although wildfire is a regular part of the Californian life – among US states California has the second highest wildfire risk after Texas – last year’s wildfires were especially damaging to Berkeley residents because of the ensuing Pacific Gas and Electricity (PG&E) power outages.

The effects of wildfire events on the local housing market have been studied extensively, many of which focus on California. However, these studies have yielded contradictory results depending on variable choice, data collection, and regression method. Some research suggests a negative correlation between wildfires and home sale prices due to a decline in the demand for local homes as a result of safety concerns and environmental destruction. Other studies suggest that home prices usually rise in the years immediately following a wildfire occurrence since the destruction of the preexisting houses decreases housing supply and increases housing demand by local residents evacuating from their homes destroyed by the wildfire. In many cases, local wildfires also have an upward effect on home prices by pushing up the home insurance premium for wildfire risk.

These two conclusions seem to be in conflict with each other, but in fact the evidence simply reflects that relative changes in supply and demand, along with insurance and other variables, in each region play a critical role in determining how the regional home prices shift in response to a wildfire event. This poses an interesting question for Berkeley residents: which of the two patterns has Berkeley displayed over the past years? Examining the movements of Berkeley’s median home price in relation to California wildfires would offer us a hint as to how the relative forces of supply and demand play out in Berkeley.

In our research, we investigate the relationship between monthly Berkeley home prices and three different monthly measures of California wildfires – count of wildfire occurrences, wildfire size (in acres), and the distance between the county where the wildfire took place and Alameda county (in miles). We limit our time period from October 2009 to September 2019 to avoid confounding variables that may be caused by business cycle anomalies such as the Great Recession. This gives us a total of 120 observations for our regression. Furthermore, because of data availability, we only include wildfires that are larger than 1000 acres (4 km2). As for distance, we use a dataset from a previous research that calculated great circle distances between all US counties. For fires that spanned multiple counties, we take an average of the distance between those counties and Alameda county.

We use two main OLS models, one with a 3-month time window and the other with a 6-month time window. For each main model, we use both linear and log-linear functional forms. The reason for choosing linear and log-linear forms is that the simpler functional forms (i.e., linear, log-linear, and log-log) perform best under omitted variable scenarios, while the complex functional forms (i.e., the quadratic) perform best when all explanatory variables are observed by the researcher (Cropper, Deck, and McConnell, 1988). Accordingly, past studies on the relationship between housing prices and wildfire events have overwhelmingly adopted the simple functional forms to mitigate the risk of omitted variable bias (Ma, 2019).

On the left-hand side of the OLS regression, we have monthly median home sale price adjusted to September 2019 US dollars using the monthly CPI for All Urban Consumers to account for inflation. On the right-hand side, we have the three explanatory variables related to wildfire, with some of our models including an interaction effect as well.

Our log-linear models in a 3-month time window are as follows:

Our log-linear models in a 6-month time window are as follows:

Table 1. Log-Linear Models for the Effect of Wildfire on Home Price (in Percentage) 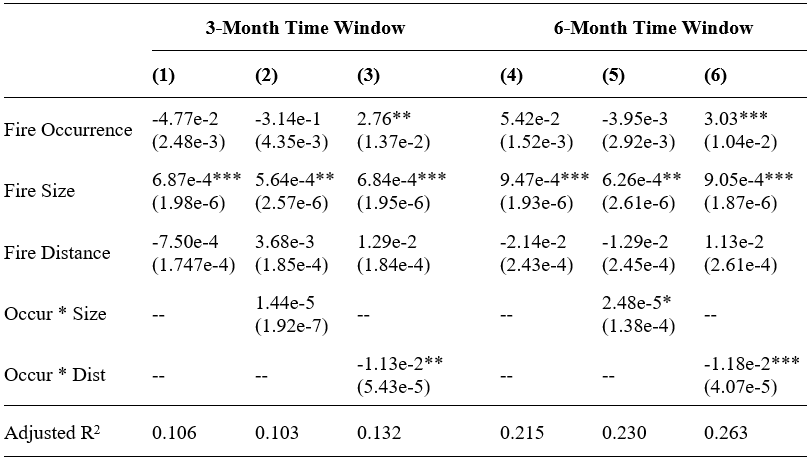 Table 2. Linear Models for the Effect of Wildfire on Home Price (in USD) 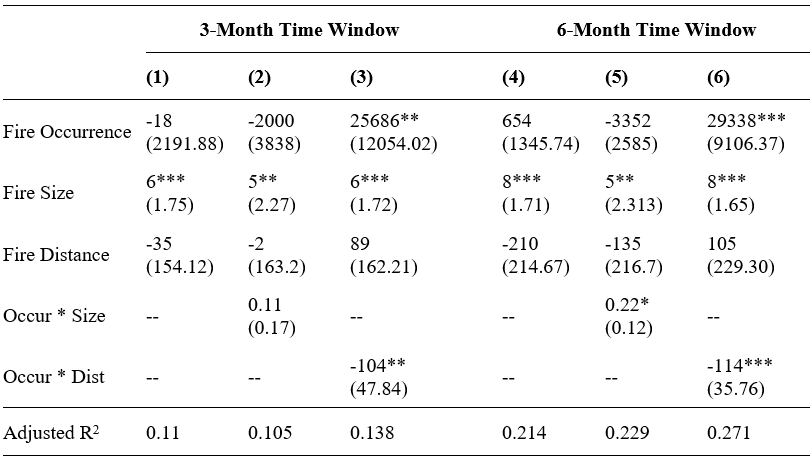 Table 1 presents the estimated marginal effects of the three wildfire measures on Berkeley’s median home sale price measured in percentage. Table 2 presents the same data as Table 1 but is measured in US dollars (inflation-adjusted as mentioned above). Overall, California wildfires seem to have a statistically significant positive effect on Berkeley’s median home sale price. In both the 3-month and 6-month time windows, higher home price is associated with more frequent wildfire occurrences and larger wildfire size. However, the effect of wildfire count on median home price depends on distance, and the effect of wildfire size depends on wildfire count.

This means that in the 3-month window, the positive effect of the wildfire count on Berkeley’s median home sale price diminishes by $104 (or 0.0113% of home sale price) for every additional mile of distance between Alameda county and the county/counties where the wildfire took place. Simply put, Berkeley’s median home price for a particular month is higher on average if there were more wildfire events over the past months, but this price increase is less dramatic if these wildfires predominantly occurred in counties far from Berkeley like San Diego or Santa Barbara.

Turning to the size variable, all of our six models show that the average wildfire size has a statistically significant positive effect (about $5 – $8, or 0.0005% – 0.001%) on Berkeley’s median home sale price. In other words, for every additional acre of the average size of wildfires that occurred in the past 3 months (or 6 months), Berkeley’s median home price increases by about $5 to $8, or 0.0005% to 0.001%. It is easy to see that this upward effect of size is much smaller than the upward effect of occurrence.

The overall positive effect of California wildfires on Berkeley’s median home sale price implies that Berkeley’s housing market corresponds to the second type introduced at the beginning of this article: Berkeley experiences greater housing demand in response to California wildfire events. This data is consistent with expectations considering that California wildfires mostly happen far from Berkeley; the average distance from Alameda is 260 miles, which is almost twice as far as Fresno from Alameda. In essence, Berkeley remains largely unaffected by problems like a deteriorated landscape view and rising safety concern following a wildfire, which would decrease housing demand and property values in counties situated in wildfire zones.

Another plausible reason why California wildfire events tend to increase Berkeley’s housing demand is that recurrent wildfires in other areas render Berkeley more attractive to prospective home purchasers in California, or to those seeking new homes after their houses were destroyed by a wildfire. If this is true, then it may also explain why the upward effect of wildfire occurrence on Berkeley’s home price tends to diminish as distance increases. In the case where wildfires take place extremely far from Berkeley, even if such wildfires occur more frequently and drive people away from the wildfire area, residents moving out are unlikely to come all the way to Berkeley. In addition, prospective home buyers previously interested in the area would also tend to favor a neighborhood sharing similar regional characteristics rather than a completely different city. Thus, the increase in demand for Berkeley homes would be less dramatic for remote wildfires. However, for wildfires that take place relatively near Berkeley, an additional wildfire occurrence can incentivize wildfire refugees or prospective home purchasers previously interested in the area affected by the wildfire to choose Berkeley as their alternative, especially considering Berkeley’s other merits like vibrant culture and convenient lifestyle. This, in turn, could drive up the demand for Berkeley homes.

Whatever the actual cause may be, the underlying fact demonstrated by our regression results is that frequent and large-scale California wildfires generally increase Berkeley’s home prices. For Berkeley residents, this may just mean more reason to care about wildfires. Not only do these fires harm the environment and force us to wear masks, but they also affect Berkeley’s housing market, driving up Berkeley’s already high home prices.