Coffee’s prevalence in our world cannot be overstated. In the United States alone, nearly 400 million cups of coffee are consumed daily, most of which stem from imported coffee beans. The U.S. is the second largest importer of coffee in the world, accounting for nearly 15 percent of the 175 million 60 kg bags of coffee beans exported worldwide. Yet the countries racking up the largest amount of coffee bean exports (Brazil, Colombia, and Honduras) have had a slew of issues to do with adjustments to climate change, the coronavirus pandemic, and as a result, problems such as labor shortages. With the pandemic’s effects on the coffee industry still in full force and climate change projected to get worse in these exporting regions, many argue that the world is on the cusp of a coffee crisis.

A Brief History of the World Coffee Industry

The European world was only introduced to the coffee bean in the 17th century, but its immediate success and skyrocketing demand led to its planting in nearly every colonial outpost. Coffee bean growth and exportation concentrated in South American countries (at the time Spanish colonies) due to shocks in coffee production elsewhere, notably in Haiti in the form of the late 18th century Haitian Revolution (and subsequent loss of free slave labor in Haiti’s coffee industry) and in Ceylon due to an appearance of the Coffee Leaf Rust Disease that decimated coffee plantations. By the early 20th century, the top three exporters of coffee were the top exporters we recognize today: Brazil, Colombia, and Costa Rica. Increased U.S. demand for coffee in the late 19th and early 20th centuries cemented the grasp of the coffee industry on these countries as well, with coffee cultivation replacing the farming of other crops such as cacao and tobacco.

Taking a closer look at Colombia’s history of coffee production and impacts of the industry on its economy can help explain why the current threats of climate change and the coronavirus pandemic are and will continue to pose disastrous consequences. Colombia’s initial manner of coffee cultivation followed the Spanish colonial hacienda system, which exploited native workers on large scale plantations. This system was profitable under the conditions that prices on coffee were high, which was ensured as long as demand was relatively high as well. In the 1920s, the U.S. accounted for 80 percent of the world’s demand for coffee, and as demand was high, prices were high and stable as well. The bitter side of this came at the end of the decade with the onset of the Great Depression, when plummeting demand for coffee led to subsequent price drops in the crop. This bankrupted these plantation style coffee production facilities and led to the Colombian government stepping in and purchasing coffee fields from the owners. With influence and help from the newly formed Fedecafé (National Federation of Coffee Growers of Colombia), the Colombian government split the coffee fields into smaller plots to give small farmers the ability to cultivate other crops alongside coffee in order to better protect these farmers against price fluctuations.

More protection against demand fluctuations came with the 1962 International Coffee Agreement (ICA), which, when signed by the 69 participating countries (which included all major importers and exporters of coffee), set a price minimum for coffee exportation. This agreement, initially spurred on to deter Latin American countries from Marxist influences, allowed for coffee prices to recover from the Great Depression and Second World War and resulted in a thriving coffee industry in Colombia that benefited small farmers immensely. In essence, coffee supported Colombia, with some even crediting the establishment of industries such as Aerolíneas Centrales de Colombia or ACES (Colombia’s brief venture into the airline industry) to the favorable economic conditions fostered by relatively high and stable coffee prices. This economic prosperity, however, was short-lived. By the end of the 1980s, the ICA collapsed and with it vanished the price minimum on coffee exports. As a result, new producers (many of them concentrated in Asia) flooded the market with cheap coffee, and smallholder farms in Colombia struggled to compete against the low prices.

The 2009 Colombian coffee crisis, caused by extreme weather and a bout of the Coffee Leaf Rust Disease, brought the struggle of small coffee farmers to the surface when Colombia’s crop of coffee was decimated. Farmers and workers in the coffee industry went on strike and demanded more financial support from the government, even going so far as to demand an establishment of a price minimum. The Colombian government increased subsidies to the industry, but were unable to set a price minimum on exports, which is still unlikely to happen without another rendering of the ICA.

Now coffee prices continue to fluctuate, with current prices below what many farmers need to break even. Many Colombian farmers have thus been forced to replace their coffee cultivation with the growth of other crops like bananas and plantains in order to sustain themselves and their families. This poses a threat to the future of the coffee industry as a whole in Colombia, and could result in future coffee shortages likely to be exacerbated by climate change and consequences of the COVID-19 pandemic.

Climate change poses a variety of issues for coffee cultivation, exacerbating the already far from ideal economic conditions for small coffee farmers. The two coffee bean species of interest to exporters (the ones that make up the majority of coffee consumed in the world), Arabica and Robusta, are particularly vulnerable to temperature variations. Arabica produces a higher quality taste than Robusta beans, but this comes at the tradeoff of being more sensitive to temperature and rain conditions. The Arabica crop is notably sensitive in its growth, requiring conditions of 18 to 21 degrees Celsius, specific amounts of rain and dry seasons, and a combination of warm days and cool nights. Looking again at Colombia’s coffee industry, climate change in regions such as the coffee rich zona cafetera (also known as the “Coffee Axis”) has pushed farmers to grow their crops at higher elevations in an attempt to preserve the finicky temperature range. With higher elevations come less available land to cultivate, reflected in the 7 percent fall in land use in the zona cafetera since 2013. Land available for coffee cultivation is expected to continue to fall worldwide as well; studies predict that by 2050, the amount of land usable for coffee will be half of what it is today.

The effects of climate change will weigh heavily on the 500,000 small coffee farms and their respective cultivators such as those in Colombia. Colombian coffee culture is imperiled by inabilities of farmers to adapt to climate change, due to the combination of new ecological hazards and existing economic hardships. Coffee growers have been working to find solutions to adjust to the difficulties posed by warmer temperatures, including farming more temperature and pest resistant varieties of Arabica beans, moving operations further uphill, and investing in shade trees to keep the crops cool. Though these solutions are innovative, they are temporary in nature and are costly to small farmers. Nearly 60 percent of coffee species are expected to go extinct in the next century, putting at risk the prospect of cultivating less used but more climate resistant Arabica varieties. Moving operations uphill and installing shade trees are solutions often unavailable to small farmers due to cost barriers. Along with low coffee prices due to the absence of an export price minimum, Colombian farmers are heading towards the path of no longer being able to afford to cultivate coffee at all, which could send the world into a full-blown coffee shortage crisis given Colombia is one of the largest exporters of Arabica coffee.

The story of smallholder farmers versus impending climate change effects is not just isolated to Colombia. 25 million farmers cultivating small-scale coffee plots, many of whom are living in poverty, account for 80 percent of the world’s coffee production, and it is these same farmers that are at greatest risk for being negatively impacted by climate change. In order to ameliorate the effects of climate change, many have argued that governments should take action to help protect their countries’ coffee industries. Collecting data and doing further research on changes in coffee cultivation and analyzing specific regional impacts would help with formally diagnosing the problems many small coffee growers currently face, and subsequently developing technology such as shade trees based on data and research in coffee-producing regions is a first step suggested by climate change experts. Subsequently making said technology and resources physically and economically available to small scale farmers is imperative in order to ensure not only the economic well being of those in the coffee industry but to continue coffee production as a whole.

COVID-19’s Effect on Labor in the Coffee Industry

Though the effects of the coronavirus pandemic are not expected to last permanently, they have only exacerbated the current coffee crisis. The pandemic has hit larger coffee farms from the labor side, as coffee pickers have been much harder to hire and incentivizing pickers with higher wages is currently impossible due to low coffee prices. Conditions for coffee pickers are far from ideal during a pandemic, as pickers often come from various regions and not all adhere to sanitary conditions such as wearing face coverings. Despite efforts to enforce stricter sanitary conditions, the measures have failed to attract sufficient numbers of workers in countries such as Colombia, despite the unemployment rate being nearly double that of the previous year.

Worries about an upcoming economic and/or ecological crisis in the coffee industry are not unfounded, especially in considering the industry’s condition in large exporting countries such as Colombia. With prices kept low from cheap foreign competition and no plan to restore the price conditions of the ICA, both small and large coffee producers are forced to face issues such as climate change and labor shortages under crippling budget constraints. Whether the solutions to these issues lie with the governments of coffee producing countries in solutions such as subsidizing climate change battling technology to small coffee farmers or more globally with large importers and exporters of coffee potentially setting a new export price minimum, action must be taken to protect the coffee industries in large exporting countries in order to avoid devastating shortages. 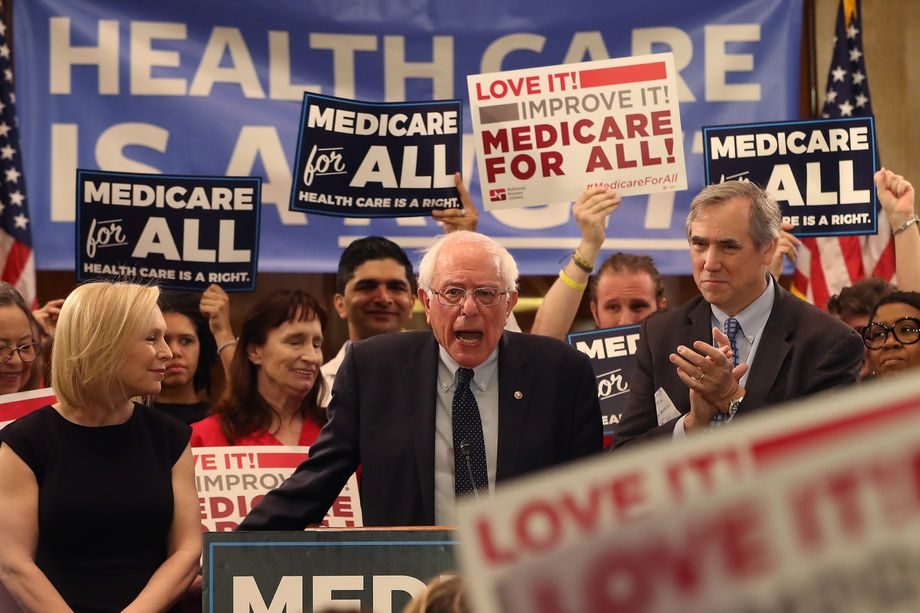 Bernie Sanders’ Moral Crusade to Implement Medicare for All